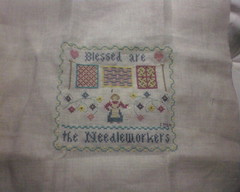 Finished!
Originally uploaded by tanaise
Of course, this is the only thng I've started recently that i don't have a goal in mind for. It's pretty much free to a good home.

On my way in to work today, I finished the Sword-Edged Blonde. Toby had recommended it a while ago, and I'll admit I was highly dubious, even after I started it. It's basically noir detective crossed with Conan, and yeah, that sounds really hard to do well. But I liked it. I don't think you really need to know more than that when you pick up the book, so go forth and do so.

Last night i was sitting on my bed, and i thought god i'm uncomfortable. So i turned my fan off. Best day this month!

Yesterday my final school loan payment cleared. So, to celebrate, a poll.

Open to: All, detailed results viewable to: All. Participants: 18

I have paid off my school loans. What should I do now?

Hmm. Grad school That's a good idea. But what degree should I get?

In what field should I be getting this degree? (be specific.)

Bonus hot weather question: Which animal is smartest in the house

Times of the year working on a baby blanket might be a bad idea: now

Guess I'll work on the wedding sampler instead.

Last night, I wrote an ending to Hoc Vale, also known as Exposing the Dead. I'm pretty sure it's not *the* ending, and it probably needs some significant pruning in the middle, as well as a scene or two before the end. But I consider it a draft, just the same. And it's about 400x better than the ending of Light Up, Light Up (ie, no one gets eaten by bears). I suspect I will print it out, and leave it lying around until I feel like revising it. It's in present tense. That's probably a mistake. It is also missing some motivation. On the plus side, I had temporarily lost this draft, and was reading an older one thinking "omg, I know I'd come up with better reasons than this." And then I found this draft, and I totally had! Yay! It is 6220 words, which is 28 pages. I believe it's my longest story yet, and that's not counting the suck that needs to be fixed.

In other news, the smoke alarm went off at 5:30 or so for about 4 minutes. Nothing gets the heart pumping quite like that. It then went off again at about 7:30 (just before I was going to get in the shower) and again at 8:30 (as I desperately rinsed conditioner out of my hair). I believe it's another battery failure issue, as it was last year--there was a little red blinky light on the one in my bedroom. So the battery has been removed (leaving it meeping angrily at me), and hopefully it will not go off repeatedly all day today. But just in case, I left a note at the main door apologizing. Last year, it went off periodically while Hannah and I were at work, but others in the house were at home. We'd come home to polite little 'your smoke alarm's been going off for 30 minutes" notes on the door. Of course, it never did that while we were home, so we had no idea what they were talking about, or ways to troubleshoot it.

Also, the heat index in Somerville is 4 billion again today. Well, 4 billion, 108 to be exact. I do so love working in an office with air conditioning on days like today. Sure, it's kinda freezing because I am wearing a skirt, but I can breath, and move without sweating, and it's just nice.

I called my mom from the checkout line and told her what I was buying. She said it was fine, she already has a grandchild, more would just be greedy.

I am ever so very grateful that my breathing drugs are working as well as they are, and that my mom makes me drink my soy protein in the morning, because if I was handling today with low blood sugar and no air, I would be in the er already, I think.

And classes start over the next two weeks. I predict approximately 45 million bugs, on top of everything else I am working on.

What is up with this? Do I come over to your house and breath on the back of your neck?

It is 104 outside. I would shower off yesterday's 98 degree sweat and party fun, but that would require standing up, and I'm right in front of the fan, so I'm only like 90 or so at the moment. Any moving, though, and it will be hot and sad.

(new cat game for the day: attempt to chew on the cord for my hands free headset. Bolt when I say "hey!")

Park street smells of new mown grass. Not at all a bad thing, but kinda odd for a subway station.
Collapse